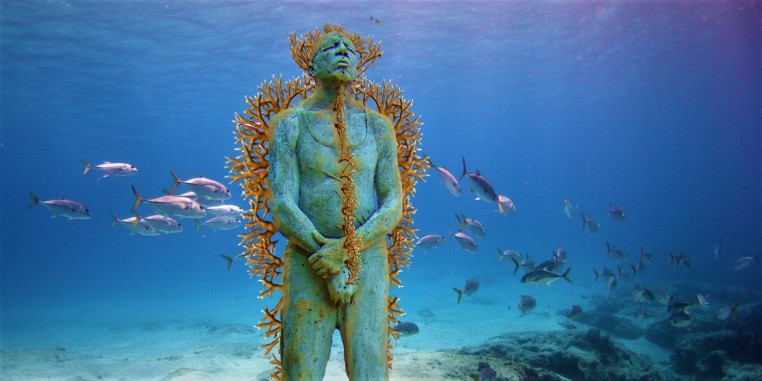 CANCUN, MEXICO – JANUARY 31: ***EXCLUSIVE*** Hombre en Llamas (Man on Fire) depicts a lone figure standing upright and defiant. The sculpture is installed 8m deep in the clear Caribbean waters surrounding the island of Isla Mujeres at a location named Manchiones. The cement figure has been drilled with over 75 holes and is currently being planted with live cuttings of fire coral (Millepora alcicorni). January 31, 2005. Deep under the seas of the Mexican Caribbean these statues look like relics of an ancient civilisation. Located in the National Marine Park, on the west coast of Isla Mujeres, Punta Cancun and Punta Nizuc, it will be the world’s largest undetwater sculpture museum. Showing three life size sculptures are the first of 400 that will be laid on the seabed over the next 13 months. Founded by Jaime Gonzalez Cano of The National Marine Park, Roberto Diaz of The Cancun Nautical Association and renowned British underwater sculptor Jason deCaires Taylor, the underwater museum is designed to celebrate the Mayan history of the region and act as an artificial reef. (Photo by Jason de Caires / Barcroft Media / Getty Images)